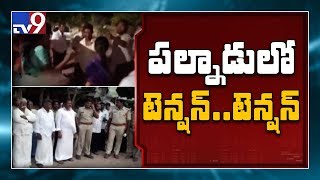 Politics in Palnadu has been heated up and there is a tensed atmosphere that has arisen due to clash between the opposition TDP and the ruling YSRCP. The clash spread from one village to another village. Last night the high tension was reported at Granthasiri in Achchampeta Mandal of Guntur district. The issue began with Ganesha immersion and it took a political shape later. This issue has led to the conflict between the activists of TDP and YSRCP. Some vehicles were torched in the incident. Some sustained injuries and they were shifted to the hospital. The police force has become alerted.

Paritala Sriram as MLA by 2024 : Paritala Sunitha
CM Jagan to hold Rachabanda from February 1
2 YSRC Ministers will be out of the Cabinet!

Janasenani has 62 acres of land in Amaravati?

2 YSRC Ministers will be out of the Cabinet!

Janasenani has 62 acres of land in Amaravati?